Following meticulous and self-created methodologies, Gabriel de la Mora researches, collects, classifies, catalogs, and manipulates remarkably diverse materials. These materials are familiar, sourced from quotidian objects—his ongoing series The weight of thought, for example, repurposes leather and rubber shoe soles. de la Mora’s materials of choice are those often considered waste or residue: collected artifacts and antiques, obsolete mechanical and utilitarian objects, parts, corporeal matter, architectural scrap. Through these, the artist explores finitude and permanence, the passing of time, it’s bracketing, and the transformation of matter and energy alike. The formal outcome of these processes plays with pre-established notions of drawing, painting, and sculpture. Characterized by their visual potency, the resulting bodies of work complicate theoretical and historical art terms (the ready-made, the objet-trouvé, the monochrome, the peinture en plein air, among others). As such, they establish an ironic spin on the abstract and minimalist aesthetics and inquire about the ever-changing notion of painting as a phenomenon. Can painting originate itself with the passing of time and without any intervention from the artist’s hand? This apparent negation of painting and other ontological musings formulated by de la Mora’s oeuvre is extended to artistic practice at large: When is an artwork born and when does it reach its conclusion? What is the role of the artist within the creative act? Coupled with equally methodical and strict processes, Gabriel de la Mora has constituted a practice in which the role of the artist is not to create nor to destroy, but to transform.

Gabriel de la Mora was born on September 23, 1968 in Mexico City, where he lives and works. He earned an MFA in Painting (2001-03) from Pratt Institute, NY and a BFA in Architecture (1987-91) from Universidad Anáhuac del Norte, Mexico City. He has been a Fulbright García-Robles grant recipient, a grantee from the Jacques and Natasha Gelman Foundation, and a member of the National System of Creators-FONCA (2013-15), Mexico.

The butterfly wings used in this new Lepidoptera series come from butterflies raised in butterfly farms in Peru, Indonesia and Madagascar, dying naturally when released, they are collected by local communities.

Sicardi | Ayers | Bacino is pleased to announce our participation in Dallas Art Fair at the Fashion Industry Gallery in Dallas’ design district from April 21-24, 2022. From a vintage Physichromie by Carlos Cruz-Diez to abstract works made of pigmented turkey feathers by Gabriel de la Mora and an acrylic painting by Mercedes Pardo, this selection offers a glimpse into the dynamic range of our modern and contemporary program. Our booth will also feature works by Elias Crespin, Gustavo Díaz, Marco Maggi, Miguel Ángel Rojas, Fanny Sanín, Melanie Smith, and John Sparagana.

Together, these artists embody the balance between early-career contemporary artists and established post-war figures that is a hallmark of the gallery’s singular visual program, raising questions about changing approaches to figuration and abstraction; explorations of materiality; and evolving perspectives across successive generations on how to chronicle the human experience.

* Series developed thanks to the support from the fellowship SISTEMA NACIONAL DE CREADORES DE ARTE, 2013 – 2015.

As an artistic exercise, “outdoors painting” or peinture en plein air still lingers in the collective consciousness as the ultimate attempt from painters to capture nature’s true spirit. Developing an inverse exercise, the series Sense of possibility does intend to encapture the vigor and force of nature, yet it does so by generating a self-inscription on the pictorial surface. In other words, De la Mora prepares a series of canvases that are covered with acrylic paint or gold sheet and which will be placed out in the open through different periods. The changes in temperature, the impact caused by falling raindrops and hail, sunlight, pollution, and even ashes from the proximate Popocatépetl volcano (a geologic structure close to Mexico City) slowly produce the apparition of lines and circles on the pigment’s surface. As a result, the many layers of paint are eroded or altered by their consequent expansion and contraction.

The figures produced by the impact of both hail and rain are perfect circles and spirals mostly, shapes similar to the structures that constitute any living being. In a tautological gesture, it is almost as if nature drew herself, and the artist only participates in this cycle of creation by making the action possible―he merely propitiates the self-portrait. As the last step, the works are consolidated, and anything that was adhered to the surface will remain fixed on it permanently.

Out of Frame is a monographic study of Gabriel de la Mora’s recent production. Consisting of three essays and accompanying images, the publication analyses the working methods that lie behind the artist’s material output. Instead of aiming to offer another reading of his series of works, mainly made of debris and discarded materials and which seek to erase the boundaries between drawing, painting, and sculpture. Thus this book distinguishes itself as contributing to the study of his working methods or processes rather than to an object-oriented focus on his finished artworks. Therefore, Out of Frame focuses on the influences that nourish de la Mora’s work along with the methodologies he devises to manipulate countless raw materials. The essays tackle questions regarding topics such as animism and the role of the collector, finitude, commodification and the ontology of the art object through the lens of the artist’s production. Fuera de Cuadro / Out of Frame will be the first in a series of digital publications that the artist will produce in collaboration with young curators and writers about his work, with this initial title also giving name to the budding series. The Fuera de Cuadro publication series seeks to to unveil the physical and mental processes entwined in De la Mora’s creative process. Each invited curator/writer will determine the scope of each book ultimately offering their interpretations on the “out of frame” theme. 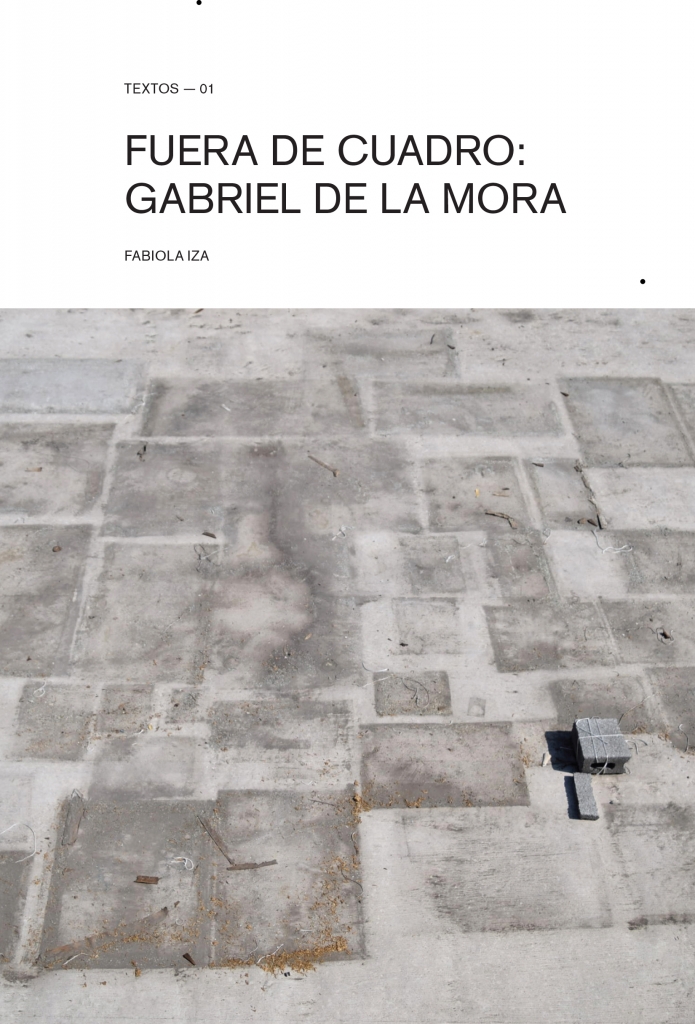 / PUBLISHED ON THE OCASSION OF THE EXHIBITION:

© The artist, the authors, the photographers,

Rebosán / Printed in Mexico at the workshop

It is available at PROYECTOSMONCLOVA gallery. 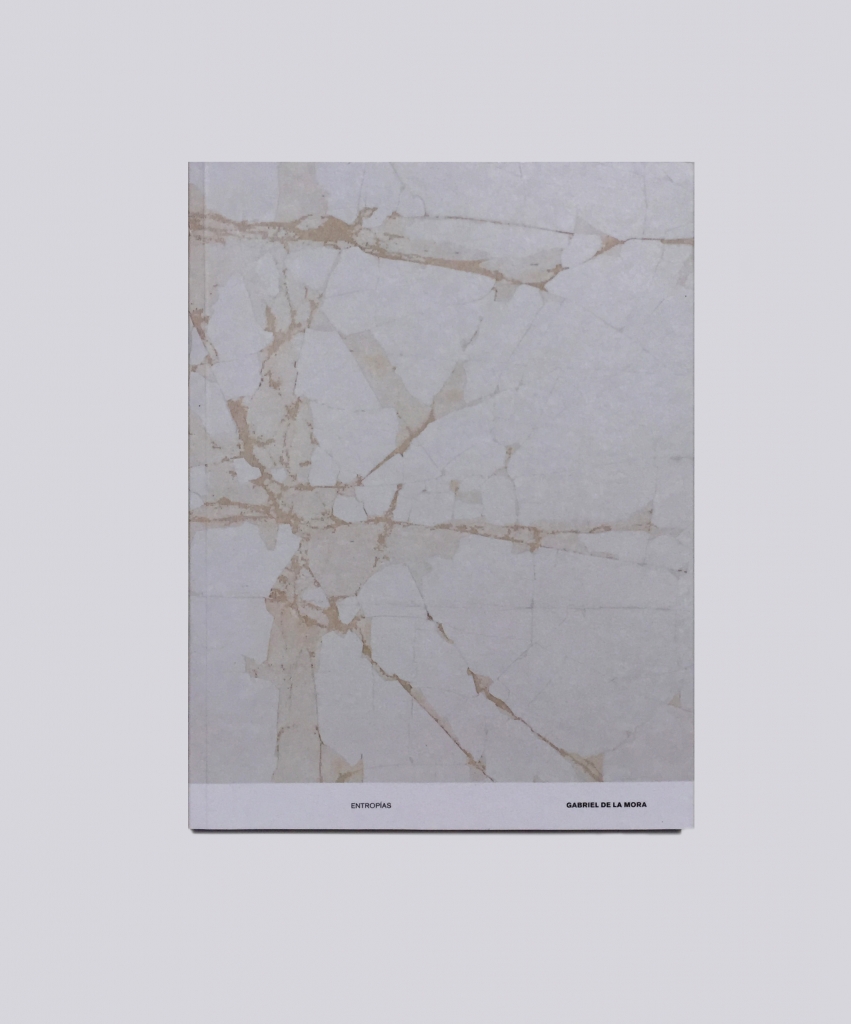 To place an international order 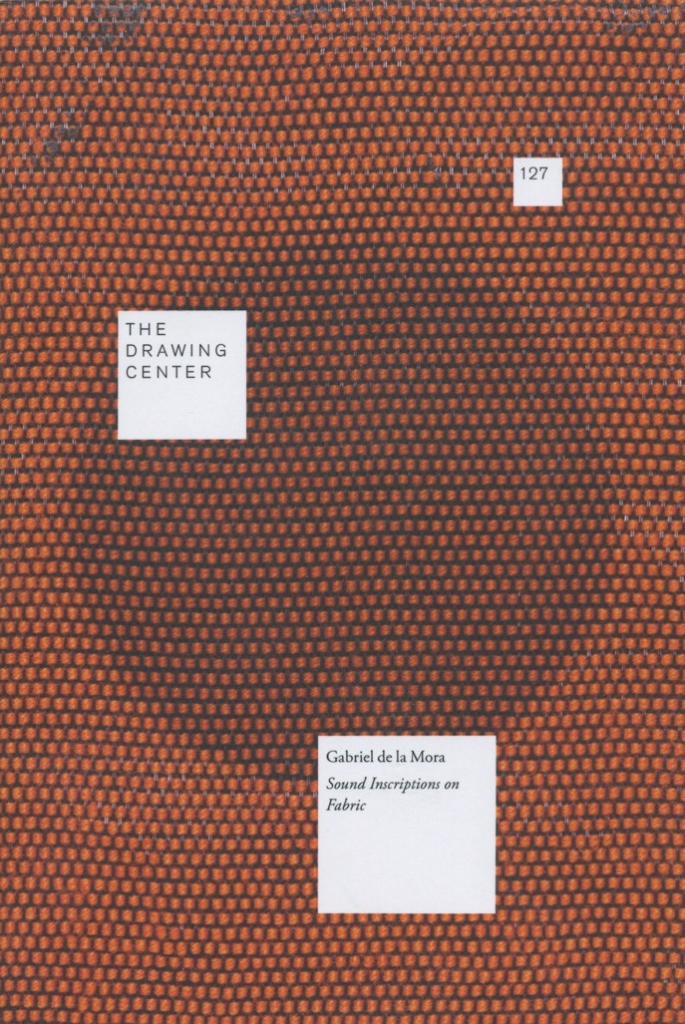 WHAT WE DO NOT SEE, WHAT LOOKS BACK AT US.

LO QUE NO VEMOS LO QUE NOS MIRA / WHAT WE DO NOT SEE, WHAT LOOKS BACK AT US 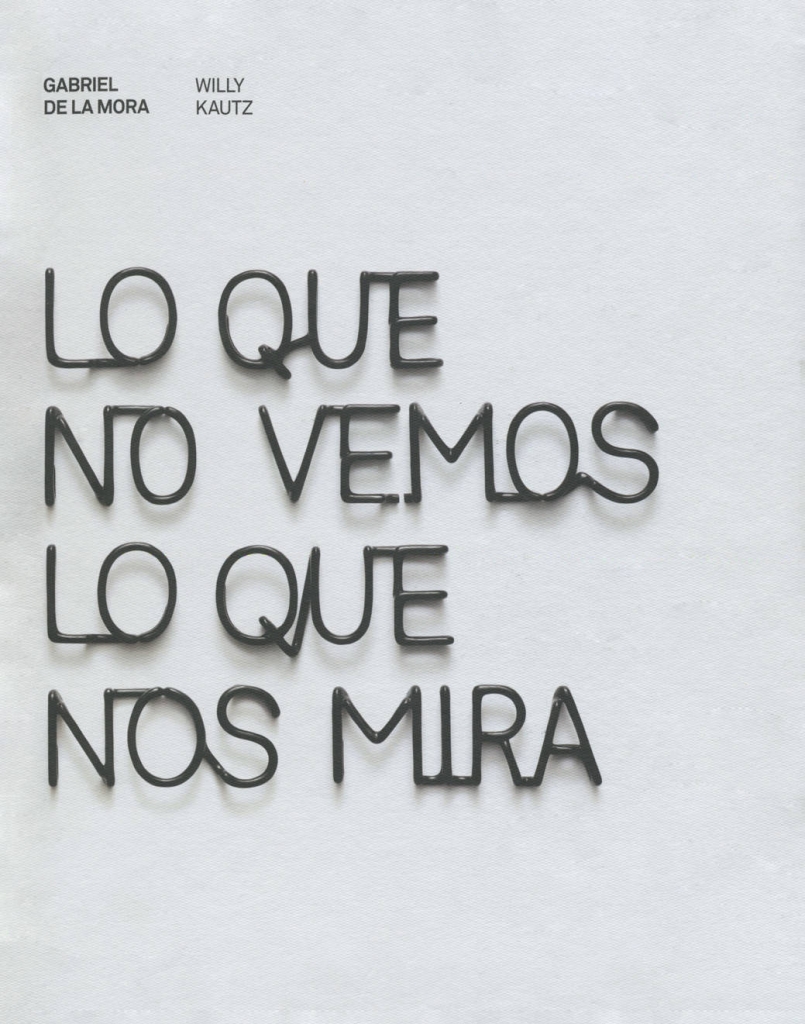 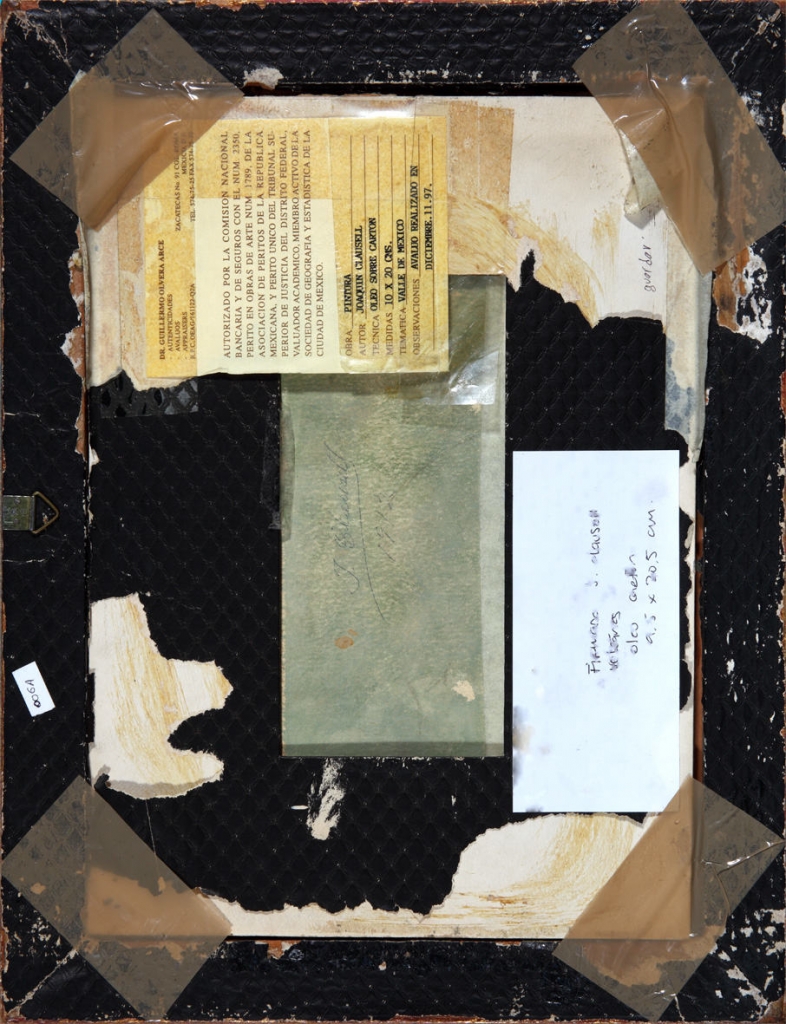 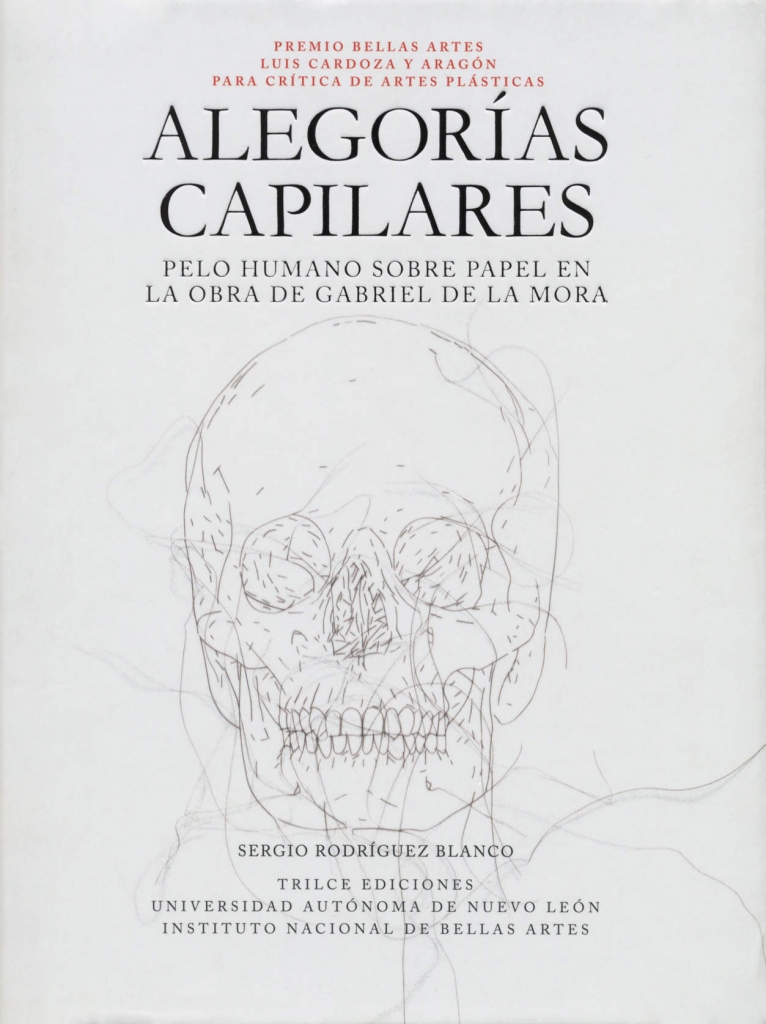 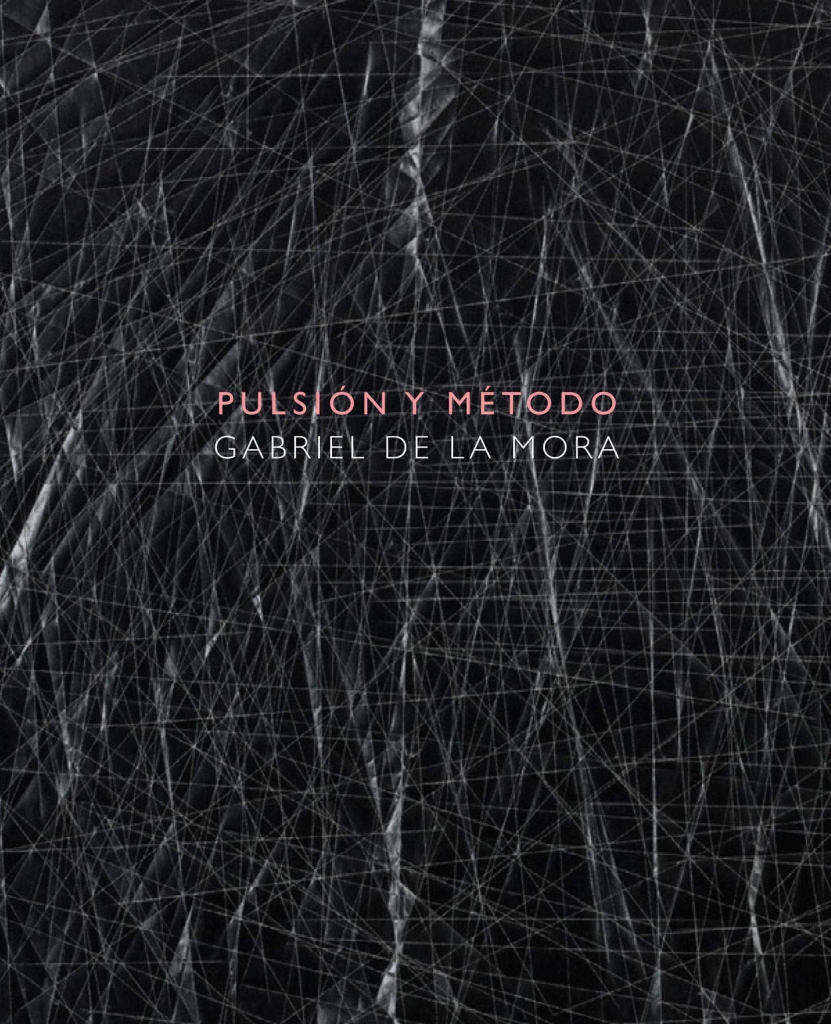